Who’d have thought watching someone read a book would be that fascinating? 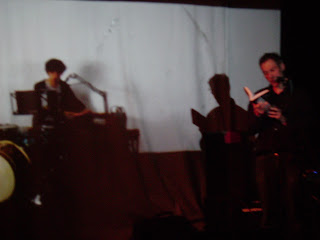 Normally it would be a drawback, but Ed being unable to make it down to the June Spirit of Gravity show meant that Laboratoro stepped up their imagination and came up with a singular solution. Xelis set up to the right of the stage with a stack of books; to the left of the stage we had a video projection of Ed sat at his drums. Xelis reads from his books and Ed drums, sometimes they talk to each other. They read and play several books, starting with “Tristram Shandy”, they both read “Fahrenheit 451” in silence for a full 3 minutes. It was a very singular performance, quite unlike anything else. Part of Xelis’ ongoing book project. 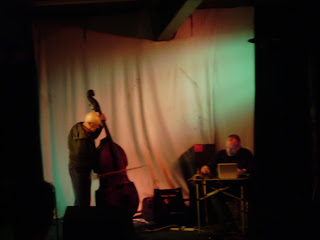 The Static Memories, with Gus Garside on the left (let’s keep the geography for the time being at least), feed each other great chunks of sound back and forth: meaty sonorities, bass runs, sibilant drones, clacks, whistles and whirrs pass back and forth between them. Gus conjures unhealthy squealing and ticks of something, while Dan blasts out a vast sub bass whoom of terror, slides and balloon squeaks, before a modernist folk song played in a factory back room breaks free to plead its special case, before being caged away once more under the stairs. It tries to get free but the spiders seem to be keeping in place…. 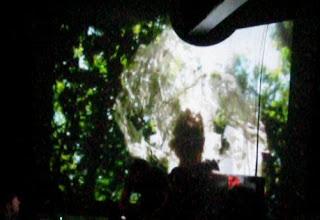 Luca Nasciuti did two pieces, the first was a purely electronic ‘Mirror’, the second was with a video artist Zeynep Dagli ‘Zetetikoi’. While she’s onstage Zeynap is illuminated, but otherwise it’s pretty much darkness apart from her film, warm green glows and cascading rainforests falling down the screen at the back of the stage, like the music constantly rolling towards us: tropical dark, dense. She moves it around on screen, occasionally resolving some jungle sky caught in the distance, while ram’s horn trumpets faintly blow against the metallic shimmer and harsh birds sing. At the end there’s a woman in a spider web hat, white, that’s lifted up onto the mirror ball that glances us all with starlight.