Binnsclagg started the evening off with what was probably the best set I’ve seen them do. They have a certain reputation (they claim completely undeserved) for power tools, noisy chaos, found poetry and leaving a hell of a mess. None of this was apparent. Verity and Karl had an oil-drum table each of things with acoustic or electronic intent, and set to work about them; psychedelic warble, cassette voice, rattle, thrum, grandmother’s clock. It’s quite spacious unlike the super-dense harshness of the last time they played. They even take turns to read. There are rhythmic sections, which quite confused me. They play chimes against thin feedback and distant jazz while Verity reads, its rather lovely, which I wasn’t expecting to write. It ends in pings dissolving into giggles. As it should.

The meaty filling in the sandwich was provided by a nice AV set from Ned Rush. He was running a modular synth, and linked that up to a laptop to create some kind of generative visuals. A lot of the visuals had that kind of kinetic thing going on so you constantly feel like you’re travelling into the screen. In the absence of having videoed his whole set I won’t reference his visuals again. The sounds started with small tonal blips and hums, scatter glitches and tiny squelches. It’s the most freeform thing I’ve seen anyone do on a modular, managing to avoid the tyranny of clocking or LFO. This is followed by something where he gets a hum and white noise loop going, with an acidy squelch with a growl that becomes a bassline. This deepens in intensity and rhythmic intent, like some odd hyper-interlocked rave where someone has stolen the 909. He slews in these odd concrete sounds and nasty drones to keep you off balance, and the breakdown when it comes almost makes you stagger sideways with its glitching detunedness. The final piece really pushes it, like something from a chill-out room of a party where the ketamine has been laced with strychnine and half those present are travelling backwards through time. Great stuff.

And finally we had the return of Johanna Bramli, also playing against visuals, she’d taken down the screen show they were ghostly against the black curtains. Starting with a slow humming tick rhythm and organ layered with wordless vocals she was the otherworldly manifestation of the film she was showing. The piece mutates slowly, some piano, odd voices, external sounds, some singing. In many ways this is the kind of thing I wanted from Laurie Anderson last time she was here; proper haunted, mysterious, emotionally haunting music. She breathes and plays some single stringed DIY instrument, thin feedback tremors wailing across the room, underpinned by a monstrous block of bass that pulses monolithically into the room while god moves chairs around upstairs. A head itch rhythm stealths into the song and tines ping, then it all shifts suddenly – lightweight arpeggios echo back around the room and the bass battering is gone, there is some singing before it dissolves into rain, and a bubble bath of small synthesizer an organ drone and more wordless vocals through to the end. Bloody lovely.

Nuclear Whale is on first. Lots of lovely Dave Smith kit a few other bits and bobs and he’s LOUD. A dense, viscous sound with lots of crunchy beats and not the space to call it techno. Thick strong basslines and noisy melodies to the fore. Boo Cook has visuals running, a cutup of space trip, bombs and glazed talking heads working against the banging of the music quite nicely.

Binnsclagg pull together probably the best set I’ve seen them do since they gave up power tools. Lots of dynamics: peaks and troughs, noise, drones, wrong music mash-ups, sing-a-longs, noise and beauty. A favourite moment for me was a big chunk of the JAMMS first single. Both Verity and Karl on electronic devices, noise machines, tome generators, tone generators, loopers and Kaoss pads. They have words and stand to say their piece. The Verity-led singsong at the end was priceless.

‘Fields’ is a piece by Tim Shaw & Sébastien Piquemal, Tim was at Fort Process last year and they are touring this art piece. They are set up onstage with some extra speakers dotted about and their own wifi network which they have asked people to connect to before they start. On stage and through the big PA they pump out some bassy drones, I nip out to the bar and notice that the phone in someone’s pocket is making a weird sound. As I get back into the main room and wander about all the phones around me have started this thin droning. if you look at their screens white command text is scrolling up and slowly the sounds from the phones begins to diversify. Obviously its quite quiet and thin sounding but the acoustic space afforded by the bass drones leaves plenty of room. all the audience seems to be milling about, comparing phone sounds and talking about what’s happening. Its probably the first time I’ve been so happy with audience noise during a set as everyone is so involved. Aces.

It was too dark for the regular camera, by and large. 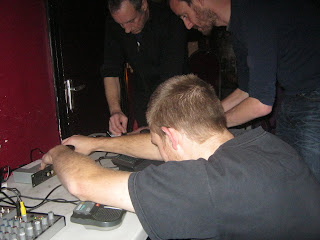 First Vlk and some saucer sounds. 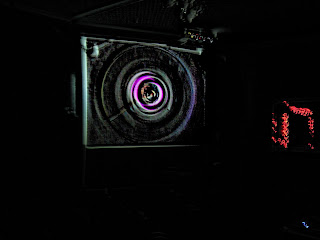 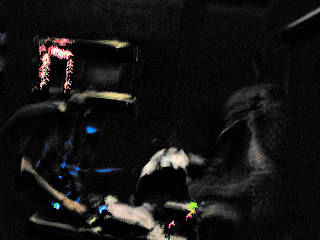 Burnt Canvas. The last song from their set, a dronish bouzouki corker. 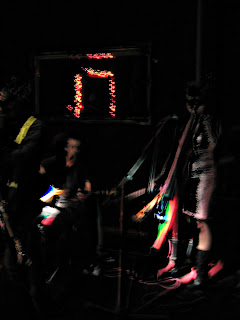