Ah, the usual combination of chaos, no-shows and great music.
Although with flowers, thanks to Jim Black. 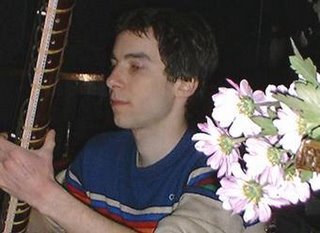 Playing his first (and as it transpired only[scroll down to Feb 23rd]) set with his lovely new Sitar was Hot Roddy.
We’ve only had Chris’ mellower and improvised Same Actor for a year or so, so it was nice to get some beats as well as the recent Bhangra influence.

Heres another picture where you can see the Sitar a bit better. 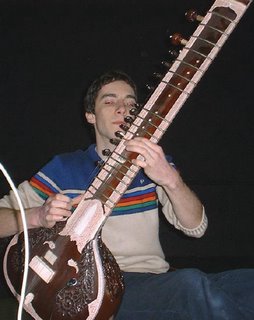 After that there was a set from Camberwell resident Register 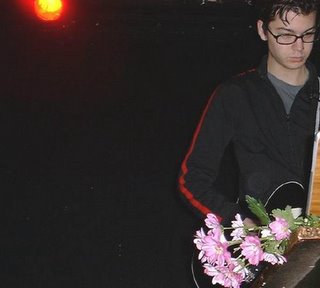 I listened to this track travelling up through the snowy midlands by train. I don’t know if it has a name, but it kind of distils all the elements of the set I liked into the 4 minutes. There are more mp3’s on his website.

So Faoi couldn’t show ‘cos Jonny’s laptop imploded under the weight of his tricky tuneful beats, so nothing I can give you for that I’m afraid.

So Permanent Bag System couldn’t show as Henry was imploding under the weight of his tricky vacuum action. EVEN THOUGH I know hed been rehearsing cos I tried to get into his house to see him and could hear the hoover going….

BUT, we had the Gross Consumer improvising a reprise of his old Billy Fucker act. Not as funny as PBS, but then – what is? But still the kind of interesting improvised one-off that always goes down well at the Spirit of Gravity. 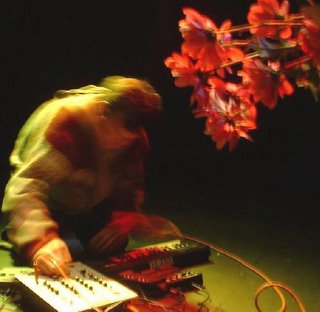 Its always nice to find a man in touch with his inner Train Enthusiast. Heh.

And it is the same bunch of flowers in each picture – how weird is that?