Full marks for dedication on two counts this month. 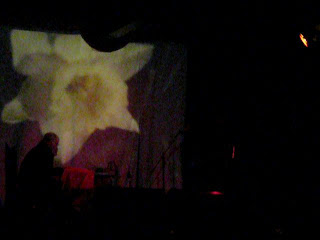 Some whistles on the recorder, shortwave radio bursts and abstract block sounds, give way to sustained chords swelling over a gentle reverse hi-hat and plucked strings. It evolves gently, chiming and ringing, odd whistles Wasp buzzes synthetic drones layering away, until a slide trumpet player heaves swelling onto the stage to duet with echoed recorder for “The Cruel Landlady”… things continue to shimmer under the sustained trumpet notes, with a round of the songs chorus slowly rotating under the final gentle squalls of songs fade until a rather harsh stomp of four to the floor comes thumping martially in with some bass oomph and sonic wibble pays a little visit. 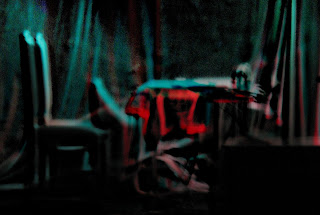 Carrying on with the ringing resonant tones, Pawnsphinx, on the first stage of his honeymoon, gave a more formed and focussed set, less whimsical as befits something based on Dostoevsky but strangely sympathetic in the way it followed on till disrupted by a heavy bell-ish thump that seemed to emerge from some devilish rave memory initiating a freefall beat that really seemed to disrupt the dynamics more that drive them. It all got very ominous with creaking doors and unpleasant chords before some unlikely wobbling bass reminded us it is the 21st Century after all. Some Detroit beats led us on via throat singing and some cockney swearing on to the finale with some excellent detailed snare and rhythm patterns that took me right back to the heady days of Instrumentality. 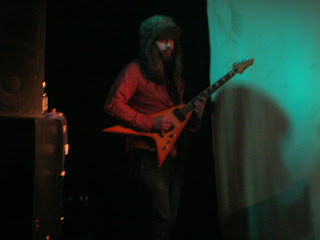 In the absence of Chloe, who was laid up with a cold that had been conspiring with the unseasonal snow to rob us of as much of our regular audience as possible, the Zero Map gave way to a solo set by Karl M V Waugh. On guitar. For a full half hour. Which was really exceptional and may be one of the best things I’ve seen Karl do. Starting off with a cascade of scrapes before some clean endless echoing picked chords came through. He managed to avoid being too close sound-wise to The Durutti Column, my default mental state for clean guitar, due to some interesting eastern intervals. Something more like Dick Dale’s more thoughtful homages to his ethnicity. Having kept it clean for the majority of the set Karl eventually gave in and let rip with some max noise over-strumming, which still managed to maintain the context of what he’d been doing up to that point. Very tasty.