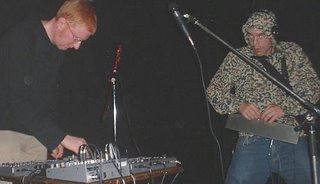 This Sound Bureaucracy get down.
Why does Nick Rilke always wear a hood onstage?
Random poetic guests and loopoopoops comprise their set.
Heres guest poet from Sold/Celled Howard letting us know what he likes to look at in art galleries (mp3).
It was either this or Lee Rashamons Britney piece about Emperor Penguins. 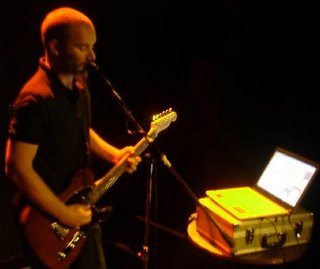 Simon Fupper plays guitar and sings a treat, he definitely played the b-side of his Jonson family single but maybe not the fabulous a side.
This is Lea (mp3) anyway. 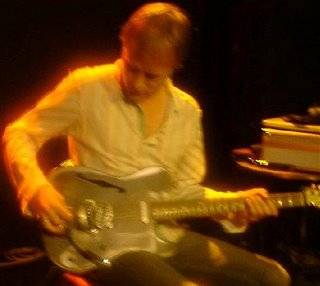 Leo Abrahams just plays the guitar, he may sing, but he didn’t for us, but then we didn’t let him have a microphone. He does play the guitar though, this photo was taken right at the beginning of the second song I think, part of the percussion loop that drives the song along.
Thats what he does, builds instrumental songs with loops: bright, clear loops. Even the distortion is clear as a bell.
This is “Anemone” from his new album “Scene memory” on Biphop.
One of the quiet songs.