Starting early we had Meshmass, Peter Picket on the uncomfy chair to the right with laptop, saxophone and effects, Richard Miles to the left with a normal sized guitar (this time) that still looks small on his lanky frame. They start so early because they like to warm up slowly, some ride pattern tapping, a slur of guitar and smoky sax tones setting a misleading mood, as the guitar slowly drifts in wayward taps and wanders off to one side. The second piece starts with Richard building tonal loops of sustain, with a rattley snare loop, xylophone plonks, thickening up with some textures and e-bow, synth and long sax notes. It breaks down a couple of times before peter starts hammering the sax with a pretty serious blart. And that’s pretty much how it continues, a loop or two, a layer of rhythm some misdirection and some disruption. They’ve played at SoG a few times now, but I think this was the most satisfying performance. The pair working well at the layers.

Second up was the Zero Map, us, like everyone else getting a piece of them while the getting is good. They have the full trestle on the go, Chloe sat behind the (bass) guitar for once – it being flat on the table ready to be bowed, they start with field recordings, blown shell drones, chimes. Karl lightly thrums a mandolin; Chloe sings through cave-ish echo. She makes other more disturbing sounds with her voice, too. A thumb piano loop plicks in the background as waves of voice and bowed bass wash back and forth. Someone introduces the voice from the Red Room and things start to get a bit darker. The sound thickens and the volume increases. At the same time the film – 5 year’s worth of short clips from Chloe’s outtakes from what looks like half a dozen different cameras starts to get a bit scarier. Distortion. Wailing. Some feedback. A train. A hoover. Harsh Noise. And out into radio static.

Last up and in the dark is Scrase, there are folk travelled up from Portsmouth to see him. They’ll need good eyesight – Ha! Can hear him plenty though. This is a laptop set, generative processing and completely tonal. So abstract its hard to describe, its the kind of thing that would normally be expected to be cold and distant, but this is warm, and immediate and oddly thrilling. Um, things change abruptly, algorithmically I suspect, sometimes slurring, sometimes loud, sometimes quiet. Things switch back and forth as if controlled by an old style squarewave LFO. There sa bit that reminds me of EVOLS clanger conversation set back at the Komedia, but then it drifts off into moogy space territory. Some passages are dense with incident, some sparse and rather lovely. Constant motion. I’m going to give up now. Proper artistic endeavour. And I loved it.

No video up for this month yet as Myspace is now so rubbish I can’t upload video, I’ll reactivate the youtube account and put it up there eventually. Promise. 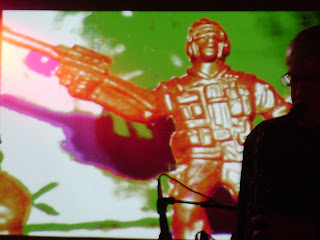 Broken Star have been playing with Ron Caines who is a long standing member of Jazz-proggers East of Eden. If you ask them nicely they’ll give you a copy of the cd they’ve done with him, in the meantime here is a bit of space music from the middle of their set. 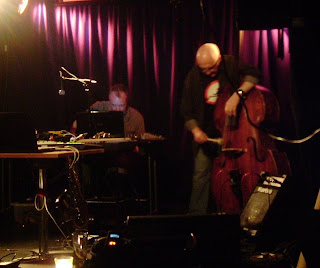 Dan and Gus have been playing together for a while, and here they get quiet on yo’ ass. 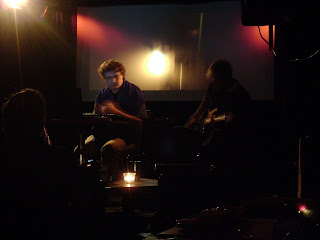 Meshmass are on a mission to produce a vast amount of loopy music. Heres a bit now.