Stuart turned up early and cracked jokes and kept everyone (well me at least) entertained before we opened. The evening was a performance of a few of Bobby’s scores from his new book “Music in Text”. Which will help explain some of the things that happen.

As people were coming in I was getting them to do some lemon sucking while listening to the pinging tines of a fork.

The evening started with a new duo of Paul Khimasia Morgan and Dan Powell. Dan had his laptop and a scattering of percussion and Paul had a tape player, zither and some jumble of things. Quiet and elliptical, rattling and humming.

Robert Barry / Bobby Barry / Monster Bobby introduced his book, explained some pieces and what the book was about. He performed three pieces which were more loosely based on his scores than following them. Lots of processing and electronics.

nil set up an impromptu kitchen for Culinary Music, mic’d up the boiling pan and shopping board. Chris Parfitt is so wonderfully deadpan, a career in silent movies was sadly avoided. Dan has a lot more ham. But not literally.

Tony Rimbaud has some of the more prepared pieces worked out, and a rather lovely vocal piece compiled out of previously recorded parts.

For the next piece musicians are scattered around the room hidden in corners arpeggiating away, Chris in one corner, little Kev in another, me under the screen, Tony and Steve over by the door…

We have an attempt at conducting a new language, splitting the room by vowels and consonants. but it all ends up as swearing.

It might not help with understanding what went on, but there are some rather lovely photos at Agata Urbaniak’s flickr page:
www.flickr.com/photos/agataurbaniak/sets/72157648968324729
Tony Rimbaud has also uploaded his full pieces on his SoundCloud page:
http://soundcloud.com/im-dr-buoyant

So, the first Scope, quite a success.

2 sites from nil, 2 sets from Captain Poopdeck, and one from The Zero Map. Some Elektrocreche action and plenty of milling about.

And Lissajous figures, Karl has been programming them up for me.

The Caroline of Brunswick upstairs room is L shaped with a section missing the rather fetching sticky carpet. This is nil’s home for the evening their pile of things scattered about as you would expect, toys wine glasses small instruments, clinking and pinging and rolling and blowing things of every description. Their first set was very intense; quiet, intricate, serious. We closed the window to keep out the random drifting of music from the smoking yard. At some point they do something that makes someone in the audience laugh. Dan picks up on this and continues it. Its most alarming.

Nil’s second set is a little more relaxed than the first. Scattered and funny involving hiding under aluminium foil and some mooing. Audience participation as well, if you were so inclined.

Captain Poopdeck took the helm on a table mid-room, Djellabah-clad beats and lots of number related samples, he has some fine new equipment and has spent a deal of the evening reading the manual for some of it. Which is always good to see.

His second set is a stormer, he’s upped the uniform stakes, with a nice yachting hat and pilots shirt. We throw a blue light on him which suits and he gets down to some top rolling beats and bass with, oddly, more counting. English eccentricity combining with deft electronica to marvellous effect.

The Zero Map set is the pivot point of the evening, two projectors throwing flames and custom animations around. Chloe’s voice is more prominent than at previous SoG shows. It has some triple octave dropping device on it and she plays a lot of theremin with a Blade-Runnerish stripe of light across her eyes. Karl’s guitar delays in a set that spirals in a nicely psychedelic manner.

For various reasons The Green Door Store didn’t happen for us in May, luckily (very as it turned out in the end) Sara Jane found room for us and we had a magical evening At The Coach House, with 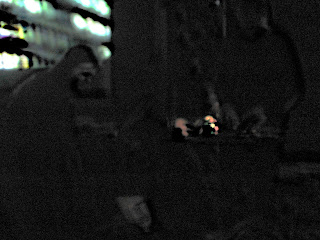 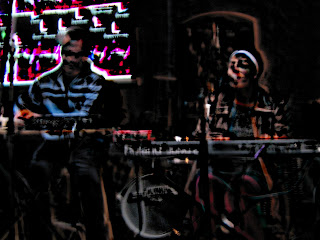 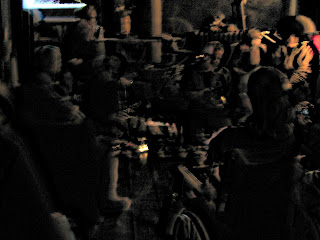 And a little bonus video of a non SoG show that I think you’ll like – The Monkey Puzzle Trio – featuring Charles Hayward from This Heat on drums.

August finally turned out to be a hot one, in between switching the air conditioner on and off we saw some cracing sets. 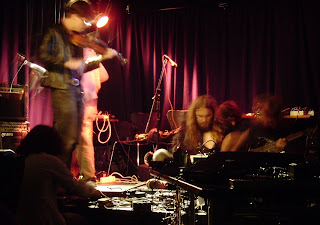 Plurals by The Spirit of Gravity 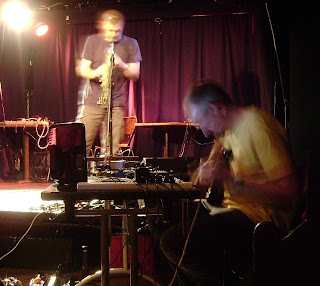 Nil started in the middle of the room but wound up on and near the stage.
Nil by The Spirit of Gravity 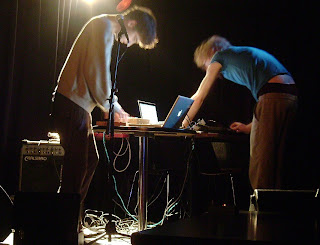 White tiger by The Spirit of Gravity 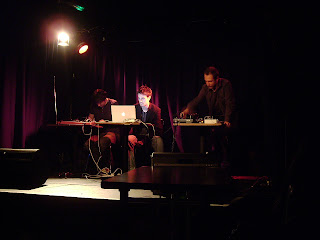 Tiger walking downhill by The Spirit of Gravity