Set up on a brace of chairs facing each other in the middle of the room, first up are DhákarlP; they have scores, Kev has his sax to which he applies various techniques starting with blowing down the reed in a fairly normal fashion, but going on through various extended techniques. Dan has his singing bow mic’d up just on the edge of ringing in and out of feedback, and his whistle apart from that he has … a lot of silence; They concentrate, seem to be playing apart and together at various times, the overall effect is almost a duet between sax and pure tones. It’s a very deliberate set, the scores are on stands and there is a lot of reading and a lot of considering about what is to be done before it’s done.

After a short interval while we line the chairs up in rows facing DA[FS]’s set up at the side of the room and some folk have a play at the twin pink mini-guitars we have in the electrocreche tonight, we’re ready for Distant Animals. Dann has a big modular synth in a case and a small sampler/playback device like the one Robin uses these days. He also has scores, and pamphlets which he has scattered about. He gives the impression that the pamphlets are the scores but I suspect this not to be true. He has a stack of papers on the table to one side and works his way through them, adjusting various things. The music is rather lovely, meandering analogue phatness. He plays for just over 30 minutes and it’s nowhere near long enough. I’d love to have several hours of this on a languid afternoon at the Coach House. Long drinks. Lots of ice, sunshine. That kind of thing. Dann is performing these scores in a number of locations with a number of different setups. Catch him, yes.

There are only three acts tonight, so we can give the Warrior Squares some room to flex themselves and it pays dividends. They play an expansive set with everyone on good form, Nick gets through three of the four trees he’s bought to play and his bass guitar, Geoff has his flute, voice and MicroKorg, James and Paul have boxes I can’t deduce, and we’re on one of those journeys where you can’t tell largely who is doing what, several layers of processing are going on, everyone is beavering away, blending and working together and it all flows and keeps on flowing as the set develops.

The midsummer shows are always a bit tricky when we come up against a major football tournament, who could fail to forget the music being drowned out at The Little Marlborough Theatre by the ladies downstairs cheering when Joe Cole scored?
So not being up against an England game was a good start. The lineup being such quality also helped. 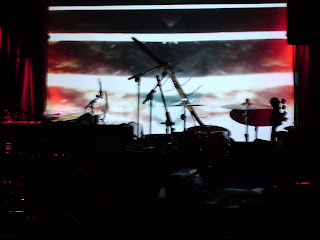 Set up in front of the stage we had The Zero Map, Chloe and Karl from the A Band making moody psychedelic stuff. That gets harder to describe every time I listen to it.
It started out with a didgeridoo-ish warble and ended like this. 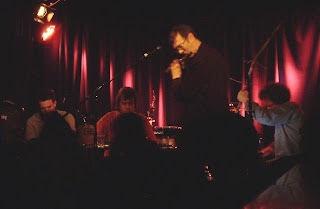 I’m still not sure if Geoff Leigh is a full time member of the Warrior Squares or has just happened to be sitting in with them whenever I’ve seen them, but this set was blindingly good, Geoff was on fire and so where the St Leonards boys.
Perversely rather than put up something from the beginning which was amongst the best I’ve ever seen at SoG, I’ve cut this bit from near the end. 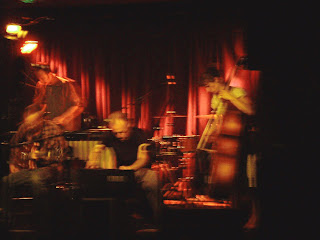 And rounding off the evening in their inimitable fashion, we have ViV, featuring Alistairs new toy…