So, a little holiday from The Green Door Store, but we will be back there for this month. But it was a lovely trip out to The Rose Hill. Where Steve started with a remarkably bucolic start to a minimal impact set, with his Indian drone box and harmonium, slowly dredging up the trademark thickening that we’ve come to know and accept… weird wandering resonances, fuzzy tones warming imperceptibly, like a small guitar propped in a corner. About 5 minutes in its starting to sound like a normal, if slightly chilled, minimal impact set. Shortly thereafter the bass begins to kick in, heralding the start of proper density, the sound begins to properly thicken up, the sitar-y tones disappearing in the murk, as creepy judders, and hisses wash across the tonal base. By 10 minutes it’s properly intense, and just continues to build, peaking at about 18 minutes. At some point he starts spinning in 2 copies of “Metal Machine Music”, adding an unsettling note of familiarity, a little relaxation before the ending back with MMM overlaying the drone box.

To go with the holiday theme, Toby from the 55th Flotilla was kind enough to run the electrocreche for us this month, bringing in a fine array of properly mangled, way beyond merely bent, toys. Lovely.

Ræppen was next up, Tim becowled, with his Sami drum, looped some throat singing into a pedal, a fairly lengthy set of phrases, with some whistling and proper bass end notes. Over that the drum was rattled along with some more singing, before it faded out over some Brighton beach pebbles he’s been touring with for a few years, rattling and thumping on the stage floor. Again looped with sparse bells and chimes. Wind breaths add a chilling edge, before he brings in the throat singing as a top line this time -almost like an SH101 synth line wah-ing over the backing. Unhuman, and definitely uneasy stuff.

Third up we had Far Rainbow, Monster Bobby on noise making devices and Emily on drums and percussion, she has a great way around a drum kit, slipping between regular sticking and extended techniques and mousetraps. They start with the sound of the steppes again, wind and rattling bits and pieces, a bass pulse very slowly cycles underneath as Emily builds up work on the cymbals and it drops away to eeriness. An organ cycles in, it sounds Casio, with a slow vibrato, field recordings playback through cheap speakers, slowly rhythms emerge from the electronics, the drums comment on it without joining them, circling round the kit in the opposite direction. It hits peak treble before decaying to a tape loop of a diesel boat making little headway on the Norfolk Broads. It has a monstrous quality to it as it gurgles away the birds slowly coming to the fore as again Emily rattles distractingly on the kit. Slowly Bobby brings drones in and it cascades out in washes of pure reverb and drum, emptying down to gong and triangle.

And to round off the four acts of the evening we have Annie Kerr, Kev Moore and Gus Garside, on respectively violin & piano, electronic devices, double bass and words. Annie starts on violin, there is a general trebly hubbub of chirruping electronics, Gus and Annie sliding strings around, it’s slippery, elusive. Rather lovely. Sounds wash in and around, it falls out at one point to Gus bowing his bass endlessly with the side of the bow, strings resonating through his effects chain. Overtones and undertones sliding in and out, Kev and Annie conjure almost human voices to hum alongside it. And then Annie goes and picks out some notes on the piano at the side of the stage, small flourishes, space, more notes. Gus and Kev bring a tension under them as Annie gets stuck in leaning over the keyboard hammering a longer series of notes up and down the keyboard, then slowly falling away, picking out a few odd notes. The room is enthralled. From somewhere in the electronic murk it sounds like East Croydon announcements, Gus starts telling one of his stories, Annie punctuates his lines with hard notes. At the end of that Kev gets a feedback vocal tone going and this is matched by a high line from Annie, they circle each other before Gus brings in a lower bowed drone and Annie gets a bit more lyrical, slurring a single note for several minutes up and down the neck of the violin wringing some harshly melancholic tomes from it. 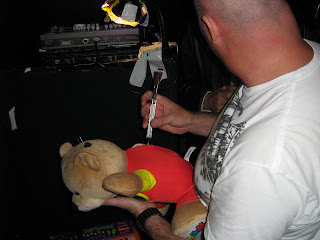 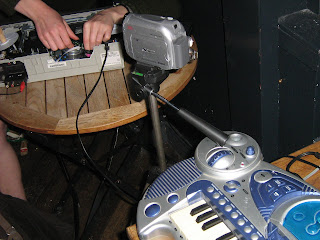 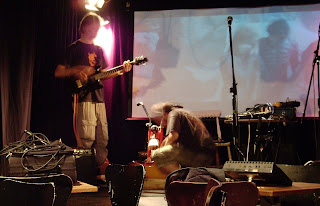 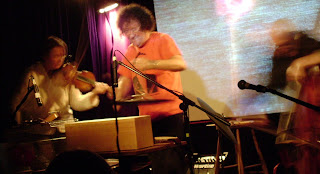 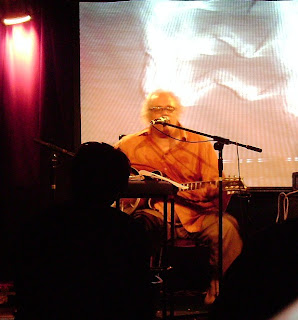